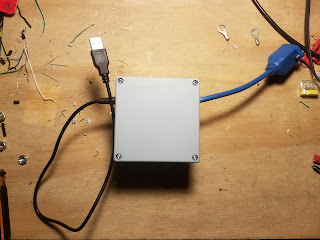 I know you might be tired of seeing posts about the Easy Digi interfaces I've been playing around with. But, I promise this one is the best iteration so far. I was recently contacted by another ham who wanted a cheaper alternative to a Signalink USB, while keeping the plug and play ease of use. This is what I came up with.

The Easy Digi boards are a great kit for those who want an easy project. I've done a couple other posts about them and if you want more details click here and here.

The last kit I assembled was with the goal of making it as compact and modular as I could. I believe I succeeded, however you are still going to need a serial port (either a good old fashioned COM port or a USB/Serial adapter) and a sound card (the one already in your computer or a USB version). So even though the interface itself is very small, you still need a few peripherals and cables to make it work.

This time the goal is simplicity. I needed to create an interface that has one USB connection to the PC and a modular plug for connecting to a transceiver. That means I have to cram all the components into a box and try to keep it compact enough you can easily throw it into your go bag.

You need three major components to make this interface work. You need the Easy Digi circuit, a serial device to trigger the PTT, and a sound device. Fortunately today all of these components are relatively cheap and easy to get.

The first step is to put the Easy Digi kit together. I won't go into detail for that here, the instructions with the kit are very easy to follow.

After that I started taking plastic cases off all the stuff I ordered so everything would fit in the project box. Luckly the enclosures were all just fitted together and not glued, so they just pulled apart.


I decided to wire the USB sound card directly to the Easy Digi. So, I pulled out the solder sucker once more and got the 3.5 mm jacks off the sound card. This left nice through hole soldering connections for the wires to run to the Easy Digi.

Next I needed to attach the USB serial device that controls the PTT circuit. There needs to be a connection from the DTR, RTS, and ground pins on the serial device to the corresponding solder pads on the EasyDigi board. Note that when looking for a USB serial device, you need one that presents the correct voltages. I've found that usually the adapters that actually have a DB9 connector on them provide the 5+ volts necessary to operate the optocoupler for the PTT. Don't bother trying to use the cheap UART devices.

After that, I needed to install the RJ45 panel mount that will connect the device to the radio. I chopped the plug end of the panel mount cable off and wired it to the board using the following pinout. This assumes the panel mount is wired as a T-568B standard, starting with the orange/white, orange wires.

Now that is all connected, it's time to plug it in for testing! It does take a few minutes for Windows to install the three USB devices and it may ask for a reboot.

You can look at the device manager and see the new devices installed. It should have installed a new PnP USB sound device, a new COM port, and the USB Hub. Hopefully Windows found all the drivers automatically. If not, there will be an error symbol next to the device in the list. If that happens, it's most likely a driver issue and you may need to install a driver manually. The USB serial interface I found had a fake prolific chipset on board, so I had to install the old driver version found here.
Running the UZ7HO soundmodem software and Winlink Express, I test my connection using the interface. Once I'm sure the components are working correctly, I installed them in the project box.
To install the components in the box, I used double sided foam tape. This stuff does a good job of holding the components to the project box without drilling or screws. All the components fit nicely in the project box with a little room to spare.

To route the cables out of the box. I used a rotary tool to cut a notch in two of the sides of the box. One for the USB hub cable to come out and one for the RJ45 jack. Luckily the USB hub cable has a molded strain relief still attached and I was able to reuse it with the box. The RJ45 jack is held in place by the lip of the enclosure. It pinches the cable enough that it takes quite a lot of force to either pull it out or push it into the box.

As you see, the completed project is still a fairly small size and is very convenient to use. Not only will this interface work for getting on packet radio, you can utilize it with any of the sound card digital modes as well.

I hope you enjoyed this project! 73