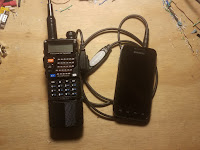 As interested in APRS and packet operations as I am, I had to try out this new cable from Baofeng Tech. The APRS-K2 cable allows you to connect any cellphone to any radio using the two pin Kenwood style mic cable and VOX to enable easy access to packet radio operation. Let's check it out!

The APRS-K2 cable is advertised as a true plug and play solution. Just grab an old cellphone or tablet and an HT that supports VOX and you're set. The cable has a standard two pin Kenwood style connector on one end and a TRRS phono plug on the other.


I picked mine up from Amazon, but you can also find it at the official Baofeng Tech site. The cable comes packaged neatly in a ziplock bag along with an instruction sheet and a CTIA/OMTP adpater, just in case the TRRS pinout doesn't match your device.

The cable is of very good quality. The rubber exterior seems to be very heavy duty and the connectors used are also high quality and are molded on to the cable. It's also long enough to allow you to store your HT in a cup holder or backpack and keep your phone handy.

Now comes the important stuff, does this thing actually work? You bet! If you follow the included instruction, you shouldn't have any issues. I was up and running on APRS in about 5 minutes. There are some quarks we will discus later though.

For my first test, I used a Samsung Galaxy S7, so my app of choice is APRSdroid. I paired it with a Baofeng UV-5re. I did not need to use the CTIA/OMTP adapter with this configuration.

Almost immediately the app was decoding APRS packets. There is a wide area digipeater within receive range and I was able to pickup several stations through it. I was worried that the cheap HT would not open the squelch fast enough and clip packets, but that wasn't the case.

Transmitting also worked well. From my shack, I can't seem to make it into the digipeater with the HT. So, I setup a two meter rig at my shack as a receiver and drove around the area to test the cable out. I was able to reach my test station just fine and I did get digipeated a couple of times.
Playing around I did notice that while the squelch on the HT opens quick enough for decoding packets, the VOX doesn't "let go" quick enough. Watching the waterfall inside of my SoundModem software, I noticed the radio stays in transmit a full 5 seconds after the packet is sent. This poses some problems if a digipeater attempts to send you an acknowledgement and you may miss packets waiting for the HT to switch back to receive. This is obviously an issue with the radio, not the cable, but I imagine most folks who buy this cable are going to be using it with similar rigs.

For a second test, I grabbed  my laptop which has a TRRS type connector. This time I did need the CTIA/OMTP adapter. I used the UZ7HO soundmodem and Winlink Express software. I was attempting to connect to a local RMS gateway to pickup messages. The VOX delay issue made this impossible. Listening in, I could hear the gateway trying to respond back to my connection requests during the 5 seconds it was taking my HT to switch back to receive.

I switched from Winlink Express over to APRSIS32 and tried using APRS with the cable. This worked pretty well. I got the same results with the Windows based software as I did with the Android app.

In conclusion, the APRS-K2 cable is a good product for getting started in APRS. The VOX delay issue in my HT limits the use to only APRS and not general packet operation. For anyone wanting to take the next step I would suggest either putting together a sound card interface or trying out the Mobilinkd TNC.
Posted by Josh Greer at 9:46:00 AM