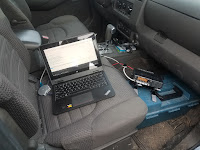 Here's a good overview of my experience participating during this winters simulated emergency test Winter Fury. This SET simulated a massive winter storm in our area that closed all major roadways and caused a vast amount of chaos including interrupting normal modes of communication. Don't worry though, ham radio to the rescue!

This years winter SET simulated a snow storm that dropped a ton of snow quickly over the Blue Ridge mountains of Southwest Virginia and North Carolina. This cause all roads, including the two major interstates near by to become difficult to traverse or impassable. For a more precise description of the SET, have a look at W4GHS's webpage about it here.

We had a lot of agencies participating. Everyone from the Virginia Department of Emergency Management to local search and rescue groups and hospitals. This years SET was well attended.

As part of our AUXCOM groups RED Team (Rapid Emergency Deployment), I was assigned the local hospital as my served agency. The hospitals in this area are part of an organization called SWVAHPC or Southwest Virginia Hospital Preparedness Commission who have a Emergency Operation Center setup to handle hospital resources during a disaster. This would be one of my main contacts during this SET, along with my RED team leader and VDEM.

The hospital I was assigned had gear that was purchased quite a while ago and included a commercial Motorola transceiver connected to some kind of two meter antenna system on the roof. I could tell it hasn't been used much.

Most of the traffic to be sent was going to be Winlink messages since this is a quick, easy, and reliable way of sending messages back and forth. However, I knew I wouldn't be able to rig the commercial radio to work for this task in the time specified for the set. I decided to try a few new things.
I was exited to try out a mobile digipeater concept I had been thinking about. In the above photo you can see my Kenwood TM-281A connected to a small laptop with a sound card interface and running UZ7HO sound modem software. I had a battery box to run the rig so I didn't drain my truck's battery and the laptop has a good run time of about 6 to 8 hours which was plenty of time for the SET. I also had a Tram 1185 magnet mount antenna on the roof.

My original plan was to leave the hospitals existing equipment untouched and use it to participate in the voice net while using my primary laptop connected to an HT to send Winlink messages through the digipeater in the truck. This didn't work very well. Even though I had parked the truck in close proximity, the walls were still too thick to allow my handheld's signal through.

So, off to plan B. I gave up on the idea of using voice for now, since it would be very slow to pass all the traffic I needed to pass and most would need some kind of relay to get to the proper agency. I quickly disconnected the antenna and connected it to my HT. I was surprised to find I could connect to two RMS packet gateways. One using 1 watt of power, the other using 4 watts. I left the HT in place and figured I would see how it would do and if it's battery would hold out through the 5 hour SET.

This setup worked very well. I was able to send and receive messages every 10 or 15 minutes for the entire SET. I switched between the two reachable packet gateway throughout the day. I figured if there was a situation where phone and internet services were down, it's good to have choices.

When all was said and done, the battery on the HT still showed full scale. I was able to pass traffic all day and eventually the imaginary snow melted. It was a good experience and I took away some good information from it.
Posted by Josh Greer at 7:37:00 AM