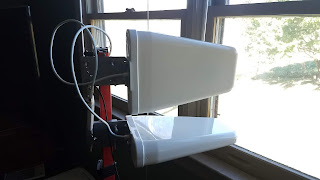 I've made the switch from a slow unreliable DSL connection to using the Sprint LTE network. To make things better I picked up some high gain antennas. In this post I'll give you some information on how I set them up and how well they work.

In the previous couple post, I wrote about switching over to LTE internet service. I even showed how to create a makeshift antenna system to bump up the signal strength of the ZTE Warp hot spot. While the connection improved with the simple wire antennas, I figured I would go all out and get a couple high gain directional antennas.

The antennas I chose to use are the Tupavco TP514, you can find them at Amazon here. They are advertised as covering 800-960 MHz and 1.7-2.5 GHz with a maximum gain of 9 dBi. The antennas were highly rated and were priced under $30. I had found other similar products from more well known manufactures, but they were priced at least double what the TP514 were. The TP514 also came with TS9 adapters and a 2ft length of coax cable. Not very long, but I figured it would be good enough for testing.

Upon arrival the antennas were well packed. They turned out to be slightly bigger than I thought. They are cheaply made however. The plastic case doesn't feel as durable as other similar antennas I've used and the coax pigtail is hard wired and is also cheap. The antennas have two holes for water drainage in the bottom that seem too big to me. Since you need to mount them in opposing polarization, if you choose to mount one horizontally, it would probably fill with water in a heavy rain.

For the cost though, these antennas are pretty good. To test them I chose to mount them to a light stand in front of my upstairs window. I moved them around until the signal quality was best, then I tried mounting the antennas in a 45 degree polarization and in a vertical/horizontal polarization to see if one worked better than the other. It turned out that vertical/horizontal gave be the best results.

The hot spot now shows 2 bars of signal strength as opposed to the 1 bar with the wire antenna. A connection test consistently gives me 8 Mbps download and 7 Mbps upload bandwidth as well as latency of between 20ms and 40ms. I've also noticed the transmit power of the hot spot is very low. Not sure what measurement they use, but previously it's been around 20 tx power and with these antenna, it's usually in the signal digits. This is a good improvement!

I haven't gotten the appropriate adapters in order to mount it on my mast outside. The antennas have RP-SMA connectors on them and I would need to adapt them to something else in order to connect to some good LMR-400 coax. I imagine the signal would improve even further with the antennas mounted externally. But for now, I'll leave them mounted indoors.

I may move them to the mast in the future, but my next project is to switch to a VOIP telephone connection and ditch the land line.
Posted by Josh Greer at 11:16:00 AM