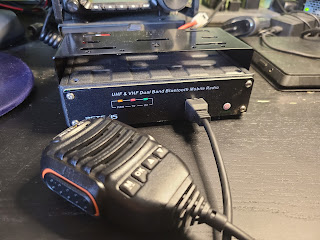 I had seen the Vero VR-N7500 reviewed a couple years ago and thought it sounded interesting. But at the time I couldn't see shelling out the $200+ for the radio, especially since most reviews showed the app control over the radio was lacking quite a bit. You could get a better known dual band mobile radio for about the same price. So, I forgot about it. Then recently I saw an advertisement from Retevis for their model RT99 and was again reminded of the N7500. Turns out both the RT99 and N7500 are the same radio and Retevis was having a sale on theirs that made it a good price for the advertised capabilities.

I primarily wanted the radio for the Bluetooth capabilities. I'm planning on using the radio for a motorcycle mobile setup and being "wire free" was a big goal. The radio is also advertised as being APRS capable, but the early reviews made a point that it didn't work quite the way it should as it would transmit packets that were not in the normal ax.25 format. Turns out that after a few years of being on the market, the development team is still working on the app and making improvements which fixed the APRS issue.

The continued development of the app is a big deal since the radio needs it in order to function. Yes you can have limited control using the four buttons on the speaker mic, but the initial setup of the radio requires the use of the app. Everything except for FM voice on the default 16 channel bank requires a device running the app. I say device, but I highly recommend an Android phone. The app is available for iOS, but from my testing it's extremely limited. As of this review the iOS version doesn't have the ability to change all the settings on the radio and will not work correctly for APRS. As a note, the blame is probably more on the way Apple limits their apps access to Bluetooth rather than anything the app development team has done. (BTW, you can find the latest version of the app by searching "HT" in the app store. Retevis links you to an old version you manually need to install and is lacking features the newer version has.)

Since I haven't finished setting up for motorcycle mobile, I've been using the radio in my truck for the last month or so. I've gotten really good reports during QSO's on the radio and the audio from the little speaker mic is quite loud and clear. I've also tested the Bluetooth capabilities with my phone and also have received good reports. The Bluetooth connection adds about a half second delay in the audio, but isn't that noticeable.

I wish my truck was new enough to have a fancy infotainment system because this radio seems to be manufactured with that in mind. I can imagine how great it would be to install the app and integrate ham radio right into the system.

APRS does work pretty well. I primarily use it as a tracker because of current app limitations. Setting up APRS is a bit strange because the apps UI isn't laid out as well as it could be. I think most users would imagine everything related to APRS would be located in the APRS section of the app, but that's not currently the case. The most important settings are actually located in the "ID Signaling" section. This is where you can enable beaconing by setting "Radio sharing" to a certain amount of time and don't forget to check the box next to "Use APRS format," otherwise you will not transmit normal ax.25 packets.

An APRS shortcoming of the app is how it receives packets. If you want to monitor repeaters and decode packets, you must have the APRS channel selected and either run the radio in Dual Ch or Scan mode and you will hear the incoming packets. Which is annoying. Hopefully they will update the app with an option to mute the APRS packets while still decoding them. Another way of running APRS is to disable the squelch and mute the volume. This method allows for better packet decoding and more reliable messaging back and forth.

The app also gives you the ability to transmit SSTV, Morse code, and DTMF. I've tested this locally and it seems to work pretty well. The SSTV however seems to be only one way at the moment. I was able to take a picture with my phone and transmit it to my other radio connected to a PC and receive the image, but I was not able to decode an image sent back to the app. It would be nice if they fixed this so the app was able to listen for an incoming SSTV transmission and decode it.

Audio Relay is interesting. The setting sounded vague and I couldn't find documentation on it. But it turns out that when this setting is enabled it turns the radio into a simplex repeater. I think this is an odd feature, but I can see it being useful in certain circumstances.

Another quark of the radio is that it has the ability to receive FM broadcast radio. I can see this being handy if you are using it in the field and wanted to listen in, but for some reason you can only hear it via the speaker mic. It doesn't get sent to the app for listening which would be nice when I'm motorcycle mobile.

The app allows for 16 channels to be programmed per region and there doesn't seem to be a limit on the number of regions you can setup.  This is useful since I can have a set of channels setup for each area I might visit or have separate regions configured for different activities. In fact I created a region that holds all the NOAA weather radio frequencies so I can keep up with the weather reports and I've even setup a region for working satellites.

Physically the radio is on the small side.  It measures 6 1/4" x 4 1/2"  1 1/2" making it fit perfectly in the cubby of the center console on my truck or drop nicely into the pocket on my motorcycle bag.

Power output is advertised at 50 watts on VHF and 40 watts on UHF. I currently don't have a power meter to check, but compared to my other mobile radios the performance would suggest the figures are correct. Power consumption seems to be around .10 amps while on standby and about 7.52 amps on high power transmit.

The official documentation is a bit lacking in my opinion. The manual is available as a PDF and provides enough information to get you started, but it doesn't cover all the features and doesn't explain the app very much. There's a user group available at this link (https://groups.google.com/g/Veron7500) that has lots of information and continued discussion. There's even a much better manual and detailed information on setting up the radio available there.

You can get some neat accessories for the RT99/N7500. There is a Bluetooth speaker mic available as well as a remote PTT. One of the cooler looking accessories is the BHM-78 which is a Bluetooth speaker mic with a display. It looks like an HT and is supposed to provide you with the core operation of the mobile rig and includes a GPS. If I acquire one of these in the future, I'll post again about it.

Rumor has it there is a Windows app in the works which would be nice while using the radio in the shack or via a laptop in the field. For now, a work around using the "Your Phone" app inside of Windows 10 does the trick for me. If your android device supports it, you can link to your PC and remotely control it.

Overall I'm very satisfied with the radio. The features included are a good bargain when you can catch the radio on sale. Yes it has some short falls and the app needs a little more development and polishing, but the future of it looks promising.