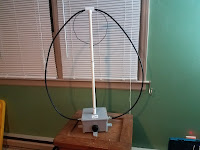 I've been seeing a lot about the small transmitting loop, or magnetic loop, antenna lately. An extremely small and portable antenna that still has similar performance of a wire antenna. From all the articles online and YouTube videos, it looks like the bees knees. I've decided to give it a try and find out exactly how good they really are.

I stumbled across the antenna design shortly after getting my license. After studying all about wire antennas, I have to say it looked like a bunch of black magic to me. The first examples of the design I saw were from commercial manufacturers selling them on the basis that they were the best emergency communication antenna around. They were selling them for a high price too.

Of course I take all the stuff I see online with a grain of salt, especially when the reviewer states they were given the antenna by the manufacture. Give me a $500 antenna and I'll "review" it too. But after doing much more research and seeing several do-it-yourself creations of loop antennas, I decided to build my own and experiment.

It seems like two manufactures in particular have cornered the online presence with their designs. One is AlphaAntenna who makes the AlphaLoop, the other is Chameleon Antenna which makes the CHA F-LOOP. Both are very similar in their design and this was the same design I wanted to follow.

Each utilizes a Faraday loop to couple with the larger loop and a small variable air capacitor in a weather resistant box. The large main loop is constructed of LMR-400 type coaxial feed line in both designs as well. After looking closely at these antennas, they looked easy enough to duplicate. But, how do these things work exactly?

After doing a little research I have found the following:
A small transmitting loop uses the magnetic portion of the electromagnetic radio wave as opposed to the electrical component. If mounted horizontally and higher than 1/4 wavelength above the ground, it radiates in a figure 8 pattern much like a dipole. Of course, if used vertically and closer to the ground the low-angle figure 8 pattern will tend to become more omnidirectional and should be very suitable for NVIS.

In short, an STL antenna is a single turn air-core RF transformer.

My STL Build:
I built my loop using the two major manufacturers designs as a starting point. Since both their products advertise covering 40 through 10 meters out of the box, I was hoping to modify mine to at least cover 80-40 meters since this would be the more common bands utilized to pass traffic via NVIS in an emergency.

I already had some LMR-400 coax laying around, so I constructed my radiating loop from an 8 foot long section. It is terminated in the standard PL-259 connectors and could be used as a jumper if needed.

The small Faraday feed loop is made from a piece of 12 gauge solid core wire and soldered onto the center and shield connection of an SO-239 chassis connector. This loop needs to be cut to 1/5th the size of the radiating loop.

I'm not sure about the specs of my tuning capacitor. I found mine inside an old busted signal generator. It consists of four gangs and seems to offer a lot of capacitance. It also had a built in reduction gear to make fine tuning easier.

After some initial experimentation, I found there was enough range in the capacitor to tune the 8ft coax loop from 80 through 30 meters. This was great because that was my initial goal, but I decided to see if I could modify it to work even higher frequencies. I added a switch that would allow me to select only a single gang of the capacitor. This simple modification allows the additional tuning range of 40 though 15 meters.

It was simple enough to make, but is the performance on par with what is advertised?

With the loop sitting on a desk in my shack on the second floor of my home, I made the following observations.

Initial testing showed that the maximum power I can use with this particular capacitor is around 35 watts. Beyond that, it will arc over the plates. This isn't a big deal, since I tend to use 25 watts or less on digital modes anyway.

The antenna is also very narrow banded and touchy when it comes to tuning. I'm glad the capacitor I found has a reduction drive already, otherwise it would be almost impossible to hit the sweet spot for a particular frequency. I've found being this narrow banded is both a pro and con. It acts as a filter to eliminate interference, but the antenna must be re-tuned often while moving within a particular band.

After using the loop for a month long period, I've discovered that it has very good NVIS propagation on 80 and 40 meters. I have been able to reliably use Winmor to connect to stations within a 300 mile radius. While I wouldn't recommend this for DX work, I have also been able to make some PSK31 contacts with stations 800+ miles away on 40 meters.

Comparing the STL with my 72ft end-fed antenna, signal reports on the FSQ digital mode were only down a couple of s-units on the STL. Reception is also very similar, but the STL antenna seems to have a lower noise floor.

Even though it seemed like a bunch of propaganda and black magic, the small transmitting loop actually works! I think it does fit the niche for a small quick deploy-able antenna for emergency use. It would also make an awesome antenna for those operators living in restricted spaces and cannot erect a larger wire antenna. I will defiantly keep using it and keep it near my go-box in case I need to take it for portable operation.
Posted by Josh Greer at 8:49:00 AM